Generalized Blush or a Ring in the Wall?

Sometimes I see a more general discoloration on the walls. Some times it is a vivid ring right below the coronary band.

This hoof shows a slight ring, but sometimes it is even more clear. 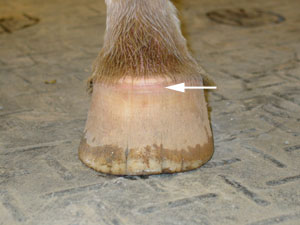 This horse had gone back into work during a very wet spring, and he was worked on firm surfaces.

A vet working with this horse suggested this combination was responsible for the over night development of this blush to his feet.

I also always suspected he had ulcers. I am not a vet and cannot diagnose ulcers, but have seen many horses with feet like this. What do I mean by feet like this?

Some hooves appear more translucent than normal. It is like I can see the underlying pink of the lamina. It is hard to convey in pictures but I will try. 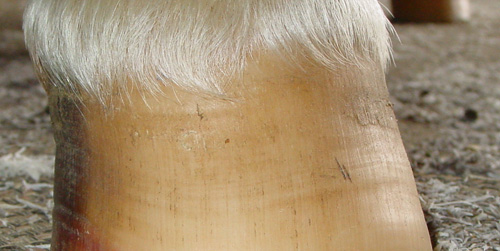 I've enlarged this picture to show a healthy section of white hoof wall.

Notice that the wall gives the impression of being thick and strong. There are slight rings and a bruise, but that is from being unbalanced. 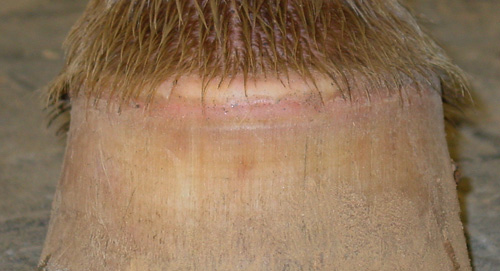 Even below the darker pink ring, tiny little bruises show. Not a great picture but the next one may be more clear. 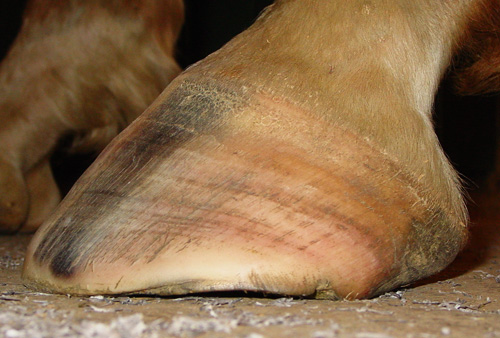 This guy had just come home from the track. He was not in the best of shape and showed all the classic symptoms of ulcers, thin, unthrifty, cribbing and his feet looked like this.

He was started on ulcer meds and they found him a new home, so I couldn't track the changes. 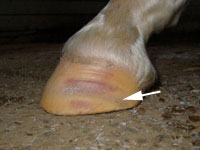 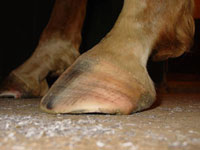 The hooves are a wonderful source of information. Sometimes I see hoof problems and other times the clues involve the health of the whole horse.

The first hoof is from a pony that is basically healthy except for the one laminitic episode a few months prior. I've indicated this with an arrow. Her bruises are a hoof problem not a general health problem.

Her feet were unbalanced, but the hoof quality is good.

The second hoof is from the gelding with ulcers. He had many other problems too. His feet indicate bigger health issues that trimming will not fix.

Hoof Bruises on the Sole

On the sole, but I don't see bruises as often as I did in the past. I no longer scrape the soles clean. I'm just not as curious any longer.

In the environment where I work, the horses are usually more comfortable with the soles being left alone. 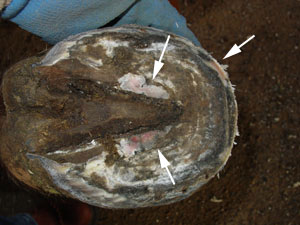 Sometimes I do find angry looking bruises on the sole/ bar area. What I find interesting is that even when they look this dark, the horses often don't complain.

These were under lumps of sole and bar that was exfoliating anyway. When I scraped it with the knife this is what I saw.

Hoof Bruises on the Heel Buttress 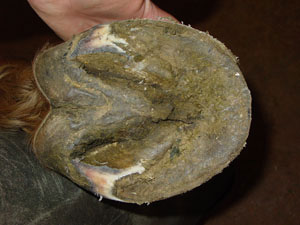 I sometimes see bruises in the heel buttresses. Usually when the horse is a new client.

Hoof Bruises on the Bar 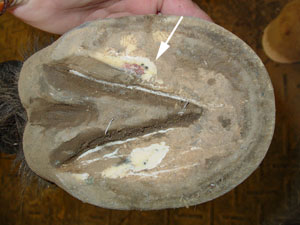 I rarely see this.

Bruises on the Frog

Bruises on the frog are fairly common. The usually are at the tip like this one.

Pink in the White Line

One of the most common forms of hoof bruise I see is pink in the white line.

It can mean a touch of laminitis, but it is often the mechanical type of laminitis. The wall had a little too much leverage on it.

These poor horses were trimmed during my over zealous period. I rarely clean the bottom of the foot up enough to see this much detail. These horses did fine, but many do not. It isn't worth taking the chance.

The first picture shows a little discoloration and I put the second up for comparison. Both white lines are what we refer to as tight meaning there is no stretching like you see in full blown laminitis.

Stretched white lines with bloody serum exudate is different. I will show that on another page.

Return to the Homepage from Hoof Bruises